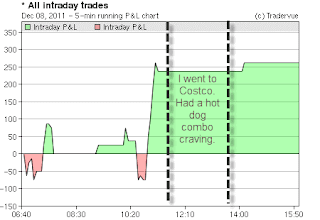 NOTES:
With 10 trades today (I pulled the trigger and they were all within the trading plan) and many more profitable trades that I passed up (continued sign of discipline) or simply missed (can't get them all, I'm human), one would think that I would have cleaned house and banked more coin than usual.  But the "average looking" bottom line results today is a little deceptive.

During the trading session, I wasn't paying as much attention to the "what could have been" with the trades that didn't quite work out -- just trying to focus on taking good setups and solid trade execution.  So when I reviewed my trades today, I discovered that the element of "luck" was not on my side, much more than I thought during the day.

There were several trades that hit +1.75 and didn't get quite at or beyond +2.00 for a fill on my profit limit order.  So I got stopped out at breakeven or a couple ticks profit.  In total, when you add up those "unlucky" trades as well as the other actual trades taken but with errors, my opportunity cost (i.e. what could have been) would have added +7.75 points to my bottom line.

From the execution perspective, there weren't too many errors, although there were a couple.  I didn't scratch the first trade as I should have.  But what was much worse was my second error -- my personal bias kept me from staying with Renato's alert to buy.  I was short biased entering the trade, and when I was almost stopped out, I exited at +2 ticks instead of sticking with the trade.  And of course, the trade eventually made at +2.00 points.

Looking back on today, I like this new mindset of focusing only on good trade selection and executing properly...according to the plan.  Forget about everything else.   Day by day, with the foundation of the Diamond Setups methodology on my side, I'm realizing that if luck is NOT on my side, I won't get hurt too bad.  But if luck is on my side, the potential for having a great day is really possible...a lot more often than I would have ever imagined.