Is today the day I crash and burn?

I admit, every day, I hear a little voice somewhere in my mind that asks, "Is today the day I crash and burn?"  Some days in the past, especially when I started off with a few losses in a row, the voice is quite loud.  But on other days, it's just a fleeting thought, triggered usually after getting stopped out of a trade.

It seems like all traders, including those that have survived long enough to become consistently profitable, have been traumatized in one way or another.  Trading sure can be a mentally brutal business.  I'm not consistently profitable yet, but I'd be the first to admit that I've had my fair share of traumatic moments.  I assume those voices I hear are permanent scars from those highly charged and emotional moments.

It's similar to a pro athlete -- it's highly likely they will be injured at one point or another in their career.  The lucky few will recover quickly with minimal to no side effects.  Most will have some level of permanent physical damage that will impact their game (and life) to some degree.  And for the unfortunate, the injury will be career ending.  It's all a risk of playing the game.

Thankfully, my risk management over the past 6 months has been good enough to keep me in the game while I continue up the steep learning curve.  Sure, I've had "injuries" along the way, but it hasn't been career ending.  However, I will forever have some lingering after effects -- like those voices I hear.

Today was a day where those voices were a little louder than the past couple weeks.  I've experienced some disbelief in how well I've done trading the system from Diamondsetups.com and Renato's chatroom over the past 2 weeks, and try to constantly temper it with reminders that it's all executed on SIM.  It's not real money yet, it's just a fantasy.

The market conditions over the past couple days seems to have been a little choppier or more difficult to read and trade.  It's likely just me distorted perception.   Since my performance both yesterday and today were not as impressive as some of the other days, I feel as though I am slipping.  Both days have been net profitable, but I wonder, am I fooling myself?  When will this all come crashing down?

Then I look at my numbers today and realize that we can only take from the markets what the markets will give us.  And today just wasn't the day to hit it out of the park, or even have an upward trending P&L chart.  Thankfully, I ended the day profitable, and my final P&L did not reflect how less than stellar I felt at the end of the day. 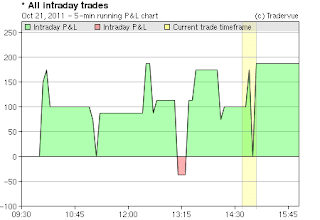 NOTES: Treading water all day long.  Could not gain traction on any series of trades.  Missed a few good trades, and took a rogue one.


Well, the bottom line is that I did NOT crash and burn today.  I can't help but recall the title of the book, "Only the Paranoid Survive", so maybe all this mental chatter is OK.  And I just can't wait until Monday so that I can once again prove the voices wrong...

"Then I look at my numbers today and realize that we can only take from the markets what the markets will give us." I wanted to comment on this because it glared at me in a few ways. Mark Douglas, in "Trading in the Zone" describes that we can only take from the market a value equal to the value we see in our selves. (i'm paraphrasing) On the days that you are feeling jaded you will not be able to take from the market. I think it is important to avoid the tendency to place the responsibility for your performance on the market; the market is indifferent- it doesn't offer or refuse reward. I also think that it is important to remove PnL from your daily analysis and focus on your emotions and executions. This is how I read your entry: "Today I couldn't find a profitable setup and had to hit out of many executions. I stuck to my trading rules and strategy, not giving into a reckless need to be right. I managed to get away today with my head above water. Maybe this isn't the market for me, or maybe I need to evaluate some new plays. We'll see." -NereusProject

Hi Nereus:
You have a lot of great and insightful points for me to consider. I believe a lot of my uncertainty right now is due to the new methodology I'm currently learning.

In the recent past, I was able to very easily define whether the quality of the setup I took was an A, B, C, etc. Therefore, grading my ability to execute against plan was quite easy. And since I knew my system well, I was able to focus more on understanding my emotional state.

However, I'm now having to refocus most of my energy on learning a new methodology and therefore, working on my mental game has taken a back seat. Currently, my emotional state alternates between "What's going on/supposed to do here?", to "Grrr, I missed that trade!", or "Grrr, I took a rogue trade".

The only thing that's absolutely clear right now is whether I made a profit (albeit on SIM) or not, so that's probably why I'm hanging on that metric so much. But I totally agree with you -- focusing on the mental game as well as the quality of execution is much more important. I need to get back there as quickly as possible.

Here's one of my key issues right now: There are various ways you can trade the system, from conservative to very aggressive, and I don't believe I have committed myself enough to a specific level. I'm still in the process of discovering that level so that I can rate my ability to execute.

But I have to be clear -- the rules of the system I'm using are consistent. And based on what I've tracked from the conservative and aggressive approaches, it has definitely worked much better than what I have achieved. Both frustrating (that my execution gap is wide) and reassuring (that the system seems to work well).

So I am the first to admit, the problems are entirely...me!

Again, lots of great points and examples you've mentioned that will continue to make me dig deep and reflect upon. Thanks again for taking the time to comment, very much appreciated!

Wondering how you made out today (Monday oct 24 ) I just couldnt get any direction at all. After the SPY gapped up and moved higher early on it just seemed to meander along and even though there was a double top around 2:30 you had to be Johnny on the spot to catch it. I was watching it and the market looked like it was ready to run higher and then it turned on a dime and reversed. I missed it and as a result didnt make a single trade. I am just trading SPY and I guess today was just one of those days and was wondering if you saw some of your set-ups develop. I think I mentioned that like you I am still learning and not profitable and have been going back to my sim account to try and work on a few things but found a day like today very difficult to navigate. Hope you did better.

My personal bias was long, but only had 2 longs compared to 4 shorts, with 66% accuracy (2 losing trades).

Missed some trades in the pre-market as well as some in the regular session, and also cancelled an order that would have filled a few ticks from the high of the day (I cancelled the order since the final "jungle" hour had just started and I thought I was getting too cute trying to sell near the highs).

Execution was better than other days, but still just so-so on an absolute basis.

I'm still getting used to the DS methodology, but what's interesting is that there seems to be a way to utilize the system so that it could work well in both rangebound days, as well as trend days. I don't believe it's marketed as such, but based on how I'm utilizing the setups to match my personal preferences, it seems to be possible. However, I'm still in learning mode...take with grain of salt.

And on another note, if you use the aggressive scalp method, then you'll get a dozen or two trades a day, and it really won't matter whether it's a trend or range day since you're picking up a couple points each time. But you (in other words, I) may get a bit dizzy by all the activity!

I'll try and post some more info in the next day or so. But great discipline not trading at all since you didn't see any good setups -- very admirable performance!

Here are my thoughts on this as promised.

When I started in the business I began with a pretty well known trader. He successfully took 7 figures out of the market every year. October 2008 he blew up every penny he had. At that time I attributed his losses to his method no longer working in the market. Now that I'm more experienced, it is obvious to me that his risk management was terrible during that period. Having 25k losing days and 5k up days was killing him. Having one day wipe out a week of profits was draining him mentally.

This happened to me. I have been struggling these last few months. I was having 4-5 up days in a row and then 1 losing day wiping all those gains. Finally I made a change to lower my daily loss and now my pnl is very steady. A brand new trader should have these risk parameters in place before the first trade is ever made.

I hoped to share this with you earlier but I have been working very hard on more risk management parameters. Daily share count, stop loss, weekly loss, amount of stocks I trade etc. Thanks for getting back to me.

Flowtastical:
Thanks for the great post and example. Your thoughts are a big reminder to me that risk management is key to survival in this business, and that we're never experienced or good enough to think it doesn't apply to us. Thanks again!