Ouch! My "excuses" for today

Doesn't it always turn out this way?  I write about how well it looks like things are going, and then the next day, one of my wheels falls off?  No, it wasn't a "crash and burn" dream come true or "I blew up my account" type of day, but it was a losing day that was much worse than it should have been.  And as is usually the case, it wasn't the system -- it was essentially all my fault.

But before we get to my excuses, here were the stats (on SIM) for the day: 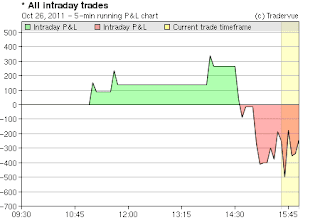 NOTES: After a disorienting morning, I had 2 trades prior to lunch.  It then looked like another steady trading day ahead.  However, in the afternoon and especially the final hour, I had 12 trades.  Some issues and delays with my order execution system threw me off, as well as sloppy errors on my part. The trading system itself worked fine, but the I had some "challenging" moments.  It could have been worse, since I was down as much as $500 (open P&L) at one point.

And Now, Here Are My Excuses!
All of these are pretty weak excuses.  And here's something else I saw as I reviewed my trades -- I noticed an old nemesis that may have made a return...The Revenge Trade!  [SHREEEK!!!]  If you see the trade records below (start reading from the bottom), you'll see that a loss is usually followed by another loss within minutes. 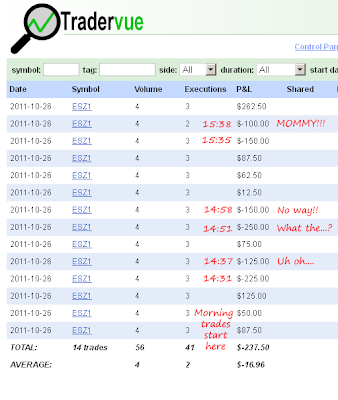 Now I do admit that some of these losses (and winners) were due to the botched job I did with the frozen order execution system/DOM.  But still, you can't really hide some of the intent behind these actions.

The Bottom Line
I've very fortunate to be involved with an occupation where even after a difficult day, I just can't wait for the next day to begin.  It's time to continue to capitalize on the moment and keep pushing it to the next level.  Let's do it!

Hey Grove,,
Well now that you got that day under your belt (you knew it was coming) today is a new day. What you write about really hits home. I can honestly say that my respect for the consistantly profitable traders is very high. The newsletter (HCPG) I subscribe to had a comment in one of their posts recently. "After getting the strategies down then this whole profession is psycology. Remember, when you get a hit to your confidence, retreat and only trade lay-ups until you get your MOJO back"..... I have this written on my wall as a reminder. I too am on my demo account trading SPY and struggle with many of the things you mention. Perseverence. Today is a new day
Tom

I know this was only one of many more "adverse condition" days to come, so it's good to be as prepared as much as possible.

Ultimately, I realize I'm totally accountable and responsible for my actions, regardless of what triggers them.

have you tracked the accuracy of the different risk performance of the DS? As in if you took just the aggressive trades would you have 80% winners and the conservative = 60%? Also what is the normal risk:reward on the different levels of aggressiveness? Thanks, I'm enjoying this blog!

Also I wanted to ask are the setups difficult to read on your own? Is it something you could have down in a couple weeks or will it take months to be able to see the setups on your own? Will you be extending the chat service after the first month?
Thanks!

Hi Matt:
For me, it's difficult to track all the various styles. There are a set of rules that are explicit, but since you can apply them on various timeframes, with various trade management strategies that depend on the number of contracts you enter and scale out, there would be too many combinations to track.

So most people just start off by watching the room for the first few days to a week totally confused and overwhelmed (like me). But you really need to follow Renato to understand how all the pieces of his system fit together.

After watching enough of his calls being made, over and over and over again, you quickly gain comfort and understanding. You see in the chatroom how Renato trades his style based on his alerts and explanations, and also see others trading it with their own particular preferences.

After starting to do some SIM (simulation) trades yourself, you will start to understand what style will best suit you (very important), and then begin to tailor the system to your requirements (i.e. account size/risk management, # contracts traded, etc.).

I am using a more aggressive strategy that borders on scalping, so my risk/reward is closer to 1:1, with about a 70+% accuracy. I believe I can do better. For others trading a higher timeframe, I would guess that their risk/reward is much better, and accuracy might be the same or lower. But again, that's strictly a guess. I think everyone in the room are day traders.

Everyone will have a different level of time it takes to master the system. Some will never "get it" and say it's not for them, but others who put in the study time (you really need to put in serious time and effort) will learn the basics within a week to a month. If you have a background working extensively with Fibonacci levels, that's a very big plus.

I'll likely continue my subscription to the chat room for a while, since Renato is a great teacher and host, there are a lot of great members, and I'm always learning something. A very nice community. But I believe once you purchase his system, you'll always have support via email.

At less than $350, it's probably one of the best risk/reward "trades" I've ever had. A member today said that just one of Renato's setups is similar to another system being sold for thousands of dollars!

Hope that helps, but let me know if you have any other questions.

Thanks for your detailed reply I appreciate it

I forgot to ask, you said if you have experience with fibs the DS would be easier to learn, I do have some experience with Fib retracements do you need to know the other fib tools also or any other indicators that would help to know before learning the DS?
Thanks

Hi Matt:
As long as you have a good basic understanding of how to use your charting platform, it shouldn't be that difficult to learn the basic mechanics of this system.

Using your Fib level retracement and extension tool over price swings is one tool used often. Other than that, trendlines, moving averages...very standard and minimal number of indicators.

There are enough archived as well as real time examples to learn quickly. Tons of information, but I've found that how quickly you learn is in direct relationship to the time and effort spent.

Just like anything else, once you "get it", you can analyze a chart and figure out what the next signal might be very quickly. I'm not quite there yet, but feeling pretty comfortable, and I've been doing this full time for about 3 weeks.

However, those only able to focus on learning the system part time may likely take a bit longer. All about getting enough real-time screen time and doing homework.

Hi Matt:
Just some more thoughts. I can't really get much more into the proprietary nature of the system, but here's how I look at the Diamond Setups system.

It's like a recipe for bread -- basic ingredients are very simple (flour, water, yeast, salt). But slight variations on the amount of the ingredients, as well as the methods used to put them together, will result in significantly different styles of bread.

You can try and develop your own recipe through trial and error (can take years). But Renato provides a very unique but straightforward and comprehensive "recipe" that if you have the discipline to learn and follow, will result in consistent profits.

The hard facts support this over my past 3 weeks trading, but I'm still in some disbelief at the true potential!

Thank you, what you have said make a lot of sense, I appreciate it!