A choppy day to remember

Today, the markets took a break after a powerful uptrend day yesterday.  It was a boring, choppy, narrow range type of day.  So does that mean my day was also boring?  Not quite.  Here's how my day broke down:

Early morning: Was patient, but only for so long.  I then entered a sub-optimal trade (it was NOT a formal Diamond Setups alert) about an hour after the open likely due to impatience.  It ended up being a full stop out.  Yuck.  Not a good way to start the day, since that usually triggers more losses.  And it did.

Lunchtime:  Although I was down for the day primarily due to my first losing trade, I had confidence that I could come back, even if it remained a choppy narrow range day.  After a few short scalps working on the resistance levels at the highs of the day, I entered yet another short position and scaled out half.  That gave me an opportunity to let the 2nd contract run with little risk and go to lunch.

While I was out, the trade got as much as +7.50 in the money.  When I returned, it was still about +5.00.  However, I did the unthinkable and let it stop me out at b/e!  It was obvious I did not have a strategy in place for this trade and treated it as a gamble.  This type of rogue trade usually gets me out of sync with my strategy and triggers more losses.  And it did.

Early afternoon: I continued to be out of sync with both the markets and Renato's calls.  He had about 3 calls today, all winners.  He clearly stated that the conditions are very difficult and that only those who are profitable for the week and aggressive traders should be trading.  I took another full stop loss trade based on a non-strategy (a rogue "why did I take that in hindsight?") trade in addition to other trades that took me even further down the into loss territory.  I can't keep making the same mistakes, so it was time to make a change.

Late afternoon:  I was not expecting nor did I wish for another "one lucky miracle trade" to get me out of my loss.  That would make me look lucky, yet again, assuming the markets even produced such a move on a day like today.  I decided it was time to regroup and focus only on a scalping strategy due to the choppy and narrow range conditions, and because there was one particular timeframe that continued to work very well even in these challenging market conditions.

I wanted to chip my way out of this the loss with small consistent wins, but unlike my prior crazy attempts to scalp, I had a solid trading strategy and methodology on my side.  Time to put it to the test!

Bottom line results: I took a nearly $600 loss and worked it up to b/e in the final 1.5 hours with 12 trades.  That's about +12 ES points.  And based on what I learned, next time my execution should be more effective which should lead to better utilization of potential profits. 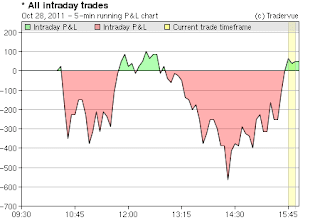 NOTES:  Check out that crazy cumulative P&L.  Even though this is "only" a SIM account, it was still a tough experience.  As far as I'm concerned, I'm trading real money.

* * * * *
The weekend is here, and after an intense week trading and studying the Diamond Setups system, I'm going to do my best to rest my mind.  I can honestly say that I was mentally fatigued by the middle of this week.  I will need to do my best to incorporate a way to protect my emotional and mental state of mind, as well as maintain my physical health through continued exercise.

It wasnt any better trading the SPY today and you could just see that happening early. Pathetic moves up and down without any direction and its so easy to try and MAKE something happen when in fact there isnt much there. I have the same voice inside my head telling me to get in, or I am trying to justify something I want to see which isnt there. After my first trade it hit me,,,that wasnt a set-up and just calm down. I wasnt down much and only made one other trade and got to even,,,(on sim),,,my feeling is that if I dont have discipline on sim and train myself there I will be hard pressed to have the discipline when live. Some may disagree with that but I commend you for being true on your sim account. So I very much agree with your comment "These types of conditions really bring out my propensity to be impatient with entries". Another point is that like you I am not earning a steady income now and feel that I have to do something everyday. Here is evidence that that isnt true. The day before was a up-trend day and perhaps many more opportunities to be more aggressive and take advantage of that because days like Friday will come and not offer as many good set-ups.
Sounds like he gave you guys some good advice about being careful or not to trade. Also I really liked your last comment,,,"As tired as I am I cant wait for Monday",,,Ditto

Congrats Grove, looks like you did an awesome job of digging out of that hole! Those can be some emotionally challenging days for me which usually lead to me just stopping myself out for the day and watching my "would be" trades turn into to big winners as I watch on the sidelines...You said you made about 12pts on 12 trades to finish the day, does that mean 12 round trips or was it 4 entries with 2 exits each? What was the stop size and target size on these trades?

Hi Tom:
Great discipline to stop trading when you knew it wasn't going to be a good day -- that's such a valuable trait to have. I'm still working on that (probably always will).

I also "saw" certain setups based on my bias that in hindsight, weren't really there. But then again, it seems to happen all the time.

Trading creates so many mind games, so I guess it's good I'm forced to take a weekend off to recover!

Hi Matt:
You're so right, digging out of losses sure is a big emotional drain. When you're down, there seems to be such a fine line between stepping up your game with increased focus and determination vs. going for a home run and significantly increasing risk and losing even more (been there, done that!). In reality, I'm sure there's a big gap between the two, but I'm still learning.

One round trip for me is usually 3 executions: 1 entry, and 2 separate exits.

Since I choked up on the bat and went for singles Friday late afternoon, my stops were usually around 2 pts, give or take. The good trades generally didn't out negative more than 2-3 ticks most of the time, so I might consider tightening up the stop for these aggressive scalps after reviewing more data. And my profit targets are generally +1.5 for the first contract, and then I let the 2nd one ride.

But I did some further analysis today and discovered that if I would have exited all contracts at +1.5 instead of scaling out and letting the 2nd contract run, the "opportunity cost" I left behind on the table was $687.50, or 13.75 points. I was shocked.

This figure doesn't even include the costs of taking bad trades, or exiting some trades early before hitting the profit target, etc.

So I could have had a decent day, but easy to say in hindsight. Since I'll only be trading 2 contracts when I start live, I'll likely stop scaling out until I build up the account and I'm able to enter with 4 contracts.

Crazy potential (at least to me) returns, but entirely possible based on what I considered a day with less favorable trading conditions. This system seems to be a really good match for me so far, but time will tell...

After reading your blog I decided to give this a try and signed up for DS. Looks like I have a lot of studying to do, of the 1-10 have you found a favorite setup or 2 that I should start with? Is there anything I should be aware of of that you wished you knew the first day? I look forward to learning this and thanks for the inspiration!

Hi Matt:
Sounds great! I'd say focus on 4, 5, and 7. Review the "Trade Management" as well as "Info & Tips." And go through the "Chat transcripts" section to get a feel for how Renato communicates and calls out his alerts.

But remember, just like learning anything new, it WILL be confusing the first few days. First time I saw all the info, I though, "Will I ever understand even the basics?!?" After 3 weeks, the answer is yes, absolutely.

Try your best to just go with the flow and soak in everything, don't think about trading or your prior trading biases (yes, I made that mistake).

As you follow along and ask questions, you will eventually catch on. And once you get the rhythm of how it works, you will start to understand the simplicity of it all.