This is why I'm still on SIM

Yet another example of Murphy's Law.  I write extensively about something and feel as though I have it nailed down.  And then the next day, I get burned by what I had thought I learned so well and told the world about.

Yes, I traded the ES...against the trend. 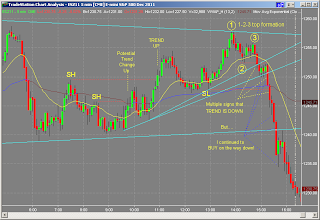 My only excuse?  My prior examples were based on the trend changing from DOWN to UP.  Today, it changed from UP to DOWN.  So I couldn't recognize the change as well [cough, cough].  But after today's example, there will be no more excuses.

This is one of those days where I'm glad I'm trading on SIM. 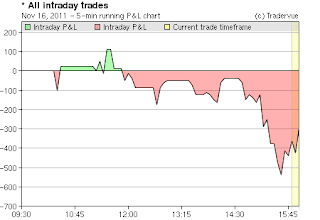 NOTES: Volatile overnight session leading to a gap down opening with a little over an hour of range trading.  The gap eventually filled before lunch, and then the markets went choppy during the lunch hour.  After a run to new highs, the ES stair stepped down, and finally dropped sharply into the close (hey, just like my cumulative P&L chart!).

I had a late start today, so I took a little longer than usual to get caught up.  And up until about 3:00 PM, I was only down slightly for the day, which was OK since I thought today was one of the more difficult days to trade.  Even though I had identified the trend to be up, for some reason, it didn't help much.

As shown in the trend chart example earlier, after 3:00 PM, there were multiple signs that the trend had changed, including the break key trendlines, vwap, support levels, in addition to a 1-2-3 top formation.  And when I began taking multiple stop losses in a row trying to scalp +2s as the volatility increased with the market drop late in the afternoon, I became impatient and started looking to get back and recover my losses, trying to BUY in order to prove to the markets that I was right (red flags are waving here).  The 33% accuracy rate clearly indicates that my trade selection was poor.

Key Takeaways
If the volatility of the markets become unusually high and various support and resistance levels are being broken like hot knife through butter, then take extra steps to identify the trend and to WAIT PATIENTLY for a high probability setup in the direction of the trend.

Also realize when markets are volatile, I DO NOT have to trade.  It feels like 22 trades is a bit too much for a (shorter than usual for me) day like today.  I need to keep a clear mind, and reenter only if the odds are strongly in my favor.  Otherwise, wait until the markets return to normal conditions where I know I have an edge.

Next time, I'll be much better prepared.
Posted by Grove Under at 8:11 PM

I meant to message you in chat today but didn't have much time in chat forgot, but you seemed to realize it today anyway. I was going through your older post yesterday after watching an ft71 webinar and noticed something he always points out to struggling traders. When you get down you tend to enter the mindset that says I have to make up these losses and then you start swinging your bat at every pitch instead of waiting for the perfect pitch and hitting it. Its very common and FT71 says he can almost always look at a traders log of the day on a big losing day and will see that instead of the normal 3-5 trades that you do on a winning day you end up trading 20-30 times and taking a bunch of less favorable trades which get stopped out and add to the commission cost. Go back and look at the amount of trades you took on you winning days and compare it to the amount of trades you take on your losing days.

I think you should consider watching his webinar 3 and his trader interventions(they are free to anyone who has donated to one of his webinars). There is a lot of great info on the mental aspect of trading in those webinars.

Hi Matt,
Great point you make about over trading and going for the fences when I'm down. It totally applies to me.

Thanks for the recommendation on FT71's webinar, I will check it out! This is one big area of challenge I'll need to overcome and address for long term success.