A call for Rogue Grove - he almost did it again 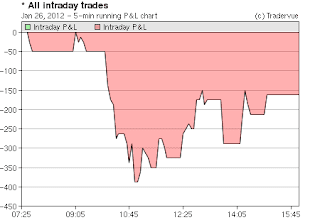 Down nearly -8 points by around lunchtime due to a miscalculation about being in a trend day, I decided it was time to call Rogue Grove into action, and see whether all those comebacks days are real or luck.

But there's one change I made -- Rogue Grove got the keys to drive only after a valid trade setup had already been executed.  I believe that helps to control Rogue Grove from ever going berserk on a revenge trade run.

Rogue Grove almost did it
In other words, he didn't get to call the shots for what trades to enter, only how to manage them once the bus was on the road.  And although Rogue Grove didn't get me back to breakeven (he recovered almost +5 which was more than 50% of the losses), there was a really good chance he could have done it.

The next to last short trade went nearly +4 (bringing me just about to breakeven), but was closed out for +1.50 (Good Grove's call).  And then the trade went as much as +6.50.  Therefore, a breakeven or even a profitable day was well within reach.

Negative opportunity cost (which is good)
And another sign that Rogue ain't so bad (when kept under control) -- he had a $-112.50 opportunity cost, which means that had I followed the proper rules, the loss on the day would have been $112.50 greater.  So this is an instance where breaking some rules (taking a hit on the execution score) and using Rogue's intuition actually worked.

More time needed
I realize that one day does not a trend make, so I'll carefully introduce some elements of Rogue Grove into the daily trading as we move forward.  At this time, it will be primarily to manage a trade after the entry has been properly executed.  I'll continue to monitor the performance closely, and then determine how/if I will modify my trading plan.

Never gave up, never stopped believing
So this was yet another example of a day where I never gave up, never stopped believing, and nearly had a complete recovery from my losses.  These types of days help to boost my confidence and makes me believe even more.  Now the real trick will be to turn that "comeback switch" from the very first trade of the day, long before I'm underwater.
Posted by Grove Under at 8:23 PM

Great comeback on a real trend day that if one can just realize the trend early on can do very well. I made 4 trades and 2 worked and 2 did not. I am still on sim using 2 contracts. My last trade was on a pullback before that last drop and my matrix was just lighting up green (with trend). My worst trade was against the trend and just lit up red before I could get out sooner. The other loss was not a full stop out.
I have always liked being a trend trader and had trouble in range bound days. This is where Rena's teaching is wonderful. I like breakouts and breakdowns, pullbacks and dips. Problem is how does one make that determination as early as possible in the day. Trend day / or Range bound day.
I cant just say that the DS is only range bound trading but it seems like thats more the norm. The DS4 reverse is a favorite of mine as its sort of a 1-2-3 pattern. Price breaks through (1) price stalls (2) price comes back to former RES/SUP which is now SUP/RES (3) and goes on in original direction.
This pattern works best in my opnion with a daily level.
I did ok yesterday but before Rena would struggle in range days. Now I struggled in a trend day,,,lol.
I really like the 5 min chart. I use a 9 / 20 and 50 ema on it. When price slices through the 9 and 20 like butter and they start to come together the Moving averages are useless,,,range day,,,but when price respects the 9 and 20 and does NOT break the 50,,,,to me its a trend day. This is not written in stone but MY way. Yesterday I didnt pay attention to it. Of course its so easy to see after the fact,,lol,,We shall try again today.

Thanks for the comment! I'm with you, I also like the DS4 REV since that generally goes with the trend. And in many ways, it's interesting how there are some days when DS will nail the high or low of the day, and then if you have the DBs, you can let the runner rides out the trend until the close.

But you're so right, having a good idea on whether we're in a trend day or not early in the day sure does make life a lot easier. And your method of using MA's sure also makes a lot of sense. So many different ways of determining trend days, and there are pros/cons for each. But it's great that you found a way that works for you.

Let's keep at it, but in the meantime, have a great weekend!