Got +4 and benched myself early 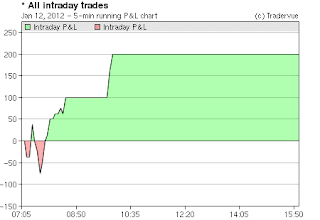 With the return of volatility today, it seems like such a shame that I didn't capitalize on all the opportunities.  But since I still wasn't feeling well and realized I wasn't thinking clearly, I did something unusual and stopped trading in the morning (doesn't hurt that I was also 2 for 2 and up +4 for the day).

After the market closed, one thought I had was, "What if my first 2 trades were losses?  Would I have continued trading, even though I was not feeling well?"  Honestly, I probably would have continued trading, and I'm not sure if that's a good or bad thing.  Had I been in the hole, there's a good chance I would have recovered the losses.  However, that also means that I wouldn't be acting consistently -- for example, acting the same regardless of whether I was having an up or down day.

This bothers me somewhat.

Because consistency of action, regardless of whether I am profitable or not on my prior trades, is what I am striving to achieve.  Maybe this is a different scenario when my state of mind or health is involved, but this is yet something else I'll need to consider for the future.

The journey continues, and at this time, the best thing I can do is to get a good nights sleep.

* NOTE ON EXECUTION SCORE
I might be ticky-tacking this one, but I dinged myself half a point on my first trade with regards to execution.  I brought my stop down to breakeven before it reached my +1.50 target, since I had to leave for a bit and knew that there was big news coming out while I was gone.  Obviously, my stop loss was not hit, but I need to be honest with myself that I did NOT follow my trade management rules properly.

Great job!. Just trade the system and don't worry about the outcome. Renato system has a 70% success rate. Nothing wrong with having a profitable day. See you tomorrow.
hector