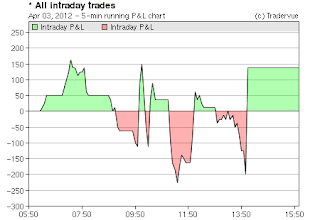 Today was a roller coaster of a day and I was fortunate to catch 2 decent moves.

One was rogue, based on my "hunch", likely from reviewing so many charts in the past, and the other was a near perfect short setup just before the FOMC minutes were released.  Both only scored half credit for my execution score, since I let them run for more than +2.00 ES points.

Trading plan oversight
And speaking of which, the execution score was not so great once again, but much of this is based on an oversight that I really didn't realize until today.  I have yet to update my trading plan to include some new setups, so every time I take one of those trades, it counts against my execution score.

This could have created some unintended subconscious impacts, since in my mind, those setups were not "official" trades, and the stats have shown that they are effective.  Therefore, I always felt that I was doing something wrong when I took those particular setups.

I'm making them official
Therefore, I'm going to add those new setups to my trading plan and make them "official" and acceptable to trade.  Let's see if this helps curtail some of the temper tantrums (i.e. revenge and rogue trades) by recognizing and acknowledging my subconscious personalities and monkeys that they have been heard and that their voices count!

However, the only problem might be if I have too many different setups, and begin to get too overwhelmed with too many setups.  So that will be something I will monitor closely.