As I was wallowing in my rogue trading day hangover earlier this weekend wondering what I'm going to do next, I realized a big gap in my overall trading process.  I wasn't doing my homework of reviewing and analyzing my trades via my trading journal.

I got somewhat lazy and didn't even realize it.  I have been diligently adding tags and notes to each one of my trading entries in my Tradervue online trading journal, but I wasn't going back and analyzing which setups were working and which were not.  I had yet another one of those "no duhhhh" moments.

Over the past year, I have updated over 2,000 records in my Tradervue trading journal.  The majority of the trades have been evaluated and updated with specific tags which provide the ability for me to use Tradervue to quickly slice and dice various types of reports and analysis on my trading performance.

I started performing this type of analysis using Tradervue for my equity trades last year to discovery my strengths, but since switching over to trading futures in October, my transition to update the tags on my trading record was a little slow.  I wasn't sure how to tag the records since the trading methodology between stocks and futures were so different.

But now that I have stabilized around a certain trading style over the past several months, I'm finally able to update my trading records effectively in a way that can generate meaningful reports and metrics.  So this weekend, I started to crank out the preliminary numbers, starting with March 2012.

I am taking the first big step in doing some meaningful homework, so that I can begin trading based on probabilities and gain confidence.  Big credit goes to FT71 on hammering home that concept based on his great webinars and his Vankar Trading brokerage service, as well as to Chris, Matt, and Cindy for constant feedback and reinforcement.  I think I'm finally starting to "get it" through my thick skill, although I know I still have a long journey ahead.

High level trading statistics
All of the output below was generated with Tradervue with the results output to Excel.  The setups that begin with "30m..." are setups based on Renato's Diamond Setups system.  It's clear to see that he has taught me a system capable of generated solid performance, assuming I have the discipline to "simply" follow the plan.

To see the Legend, please see the report under the "Additional Details" section below. 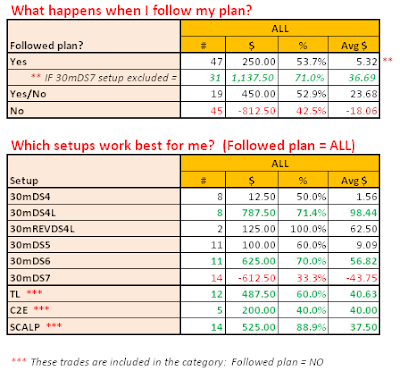 And here's the summary of the "P&L killer" (NOTE: The Revenge/Rogue tags are not mutually exclusive so there IS some overlap.  Therefore, aggregating the results is not valid.)

One observation I'll closely watch is how well the "Reverse Play" setup worked in comparison to others.  I've always had a feeling they worked well, and now I have some limited stats to prove it.

There is also a legend in the report below. 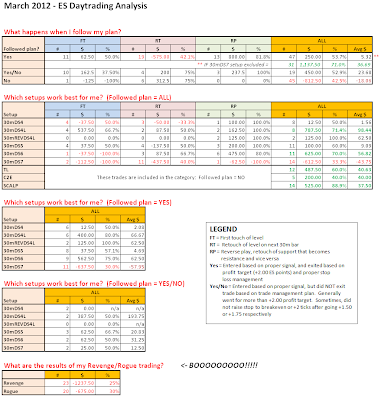