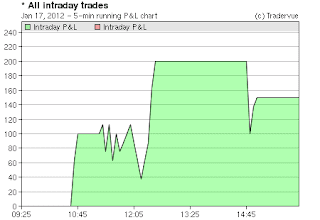 Another day that seemed it will provide some great trading opportunities due to the gap open at the opening of the cash market, but then lulled people to sleep by around lunchtime.

There was some movement during the middle of lunch, creating some hope for volatility.  But then the "lull you to sleep" phase 2 kicked in for another 2 hours, and by the time the ES broke out from the descending triangle, many were caught sleeping.

And what I hope will soon become a boring broken record commentary -- I had another day where the execution to my trading plan was perfect.  As a reminder, this execution score does not include missed trades (I had at 2 missed trades that could have made +4.00, due to an order that was off by 1 or 2 ticks).  But based on those trades that I did take, I could not have executed them any better.

Benny said...
Your current thought process is focused on all the wrong things. A good trader uses his system as a guidance, not an absolute rule. Good traders know when to break their own rules because through experience, no rule works all the time in all conditions in the market.

Grove Under said...
Hi Benny,
You really have a great point, and something that I've struggled with. One example, there are times when I sense that taking +1.50 profits makes more sense vs. +2.00, based on market conditions. What I'm really trying to control at this time by being so "rules rigid" is to keep "Revenge Grove" from ever coming back into the picture. He's quite destructive.

However, I believe "Rouge Grove" (might need to change his name, bad connotation) isn't really so bad, and will likely provide valuable insight in the future as when I should break the rules or take a non-strategy trade.

Problem? I'm not yet mature nor experienced enough to differentiate the messages between Revenge and Rogue well enough. But I'm going to better track their voices in real time, and through time, I should be able to tell them apart.
Anonymous said...
Benny - that's great if you know when to violate your system but then you don't have much of a system if you break it, right? If your system requires intervention or rule breaking, maybe your system isn't as robust as you think.

The other side of the coin is that if your system is good, you trade it and don't need to decide when to break it and do something random.

Beyond my thought already written above, I believe there's a wide range between being a pure discretionary trader vs. a pure mechanical system trader, with many points in between.  Each one of us is different, and based on our strengths and weaknesses, there is probably an area on the discretionary vs. mechanical scale that works best for you.

Therefore, I think both Benny and Anonymous have great points.  There are some traders where if you ask them why they took a particular setup (which made money), but then avoided another nearly identical setup (which lost money), they would probably tell you that the 2nd one just didn't "feel" right.  By spending thousands of hours reviewing charts and trades, they have probably developed a "system" within their mind that can never be explicitly transcribed into a mechanical system.

I'm far from that level, although there are times when my subconscious tells me (or yells at me) to either take a trade or avoid a trade.  I'd say it's a bit more than 50% correct, so perhaps I'm starting to develop and refine that inner voice.  And through time, maybe I can actually get to the point where I can quantitatively measure and prove (via my opportunity costs metric) that I can consistently outperform the system.

That's when I'll know that maybe it's time I can start breaking some of my rules from my trading plan/system on a regular basis.  Or maybe I'll never reach that stage.  Speaking of which.... 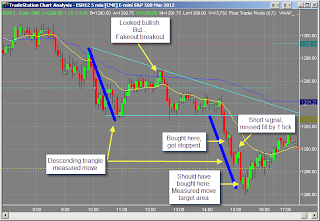 First off I think you are doing a great job all around and as a reader of your blog YOU may not see it but a reader can, so keep it up.

Good stuff here and if I may throw my 2 cents in I shall. I have read a million times to keep emotion out of trading. I listened to a webinar a while back on trading psycology. Some psyco babble of course but as with anything whether I buy a book or go to a seminar I will always at least learn one thing. The speaker said that we are human beings and its her belief that we cannot take emotions out of trading nor do we want to. Interesting. I will get to the last part about not wanting to in a bit.
She said that we may not be able to control our emotions BUT we can control our actions. Read that over and over and think about that. This speaks volumes to me. It says,,,,KNOW what I will do in my trades BEFORE I enter them. If I know what I will do there is no decision is there? Interesting.
If you are looking for 2 pts and the market stalls and you know that the market can stall,,,you have already made the decision to either exit at 1.50 or 1.75 and take some profit OR you will allow the trade to either hit your profit target or stop loss. This is already known BEFORE the trade. Your decision to manage the trade is in place BEFORE the trade takes place. I lay in bed at night and picture all the different senerios that can happen when I enter a trade. I see the candle,,I feel the mouse,,I hear the click,,I see the order entry...I follow the progress and if it goes up I wait to see what it will do. If it goes against I see red and am ready to act. My point is that I am trying to know BEFORE hand everything that can and will happen so I am ready and my decision can be made BEFORE. ,,,,wow,,,,sorry for bring so wordy,,,lol,,
One last thing,,,that emotions are ok to have in trading. Have you ever seen Rena say that he is anticipating? he may draw a chart before it is ready or looks to enter before a close? ,,,I believe this is instinct. It comes after much time in whatever we do but I believe its a valuable emotion. (Some may say that instinct is not an emotion that its a sense,,,that debate is for another blog,,,lol,,)
Of course these things are what I have read or are my opinion but I think there are some good things to consider.

You're blog inspired me to start keeping mine again. Looks like we trade somewhat similar size. I'm trading a lot smaller so far this year.

A lot of folks will say that managing open profit is both art and science, feel and intuition. I hear instinct often too. What I've found is that rarely do many home gamers manually back test their system(s) or have any idea the expected outcome over a large sample set. So they really don't know what exit strategy is actually more profitable. In turn, 2 points becomes a 'rule,' taking profit early is breaking that rule, etc. With the back-testing in hand if you chose to manage open profit with a tactic that is not the statistically most profitable option, you do so knowing that it's not the most optimal move.

Hi Tom:
Thanks as always for the feedback! Really great comment, and totally agree with you. Having a solid game plan is vital, and that emotions are just a part of this job. Also, great example of visualization as well, I could also see my screen as you were describing what you were doing, LOL!

Hi HomeHedgie:
Glad to hear about your blogging! And great point about having enough data and backtesting to help come up with the most optimal plan. I know that's an area where I can improve, and hope to do so soon.

One area I find challenging is how to determine what the optimal profit object should be, on any given day or time of day.

For example, even on an intraday basis, market conditions change (e.g. NY open vs. NY lunchtime), as well as big news day vs non-news day. Lots of ways of looking at the data.

That's where I believe some of that intuitive/instinctive voice from your subconscious comes into play -- but I also believe that voice can only be reliable after many thousands of hours of screen time and analysis.

Thanks for the great comment, it has given me a lot more to think about!