Is there anybody out there? 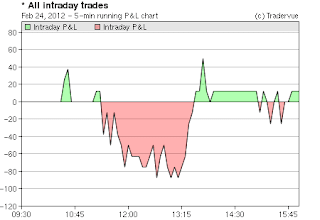 
"Is there anybody out there?"

For the ES, Friday was the lowest non-holiday (i.e. excluding Christmas period) volume since June 9, 2011, as well as the narrowest range day since April 21, 2011.  Seems like most people took advantage of the shortened holiday week, and maybe I didn't get the memo?  It really didn't seem like very many people were out there.

I took 3 trades on Friday, with one trade that was somewhat mismanaged, although it didn't impact my opportunity cost.  In the afternoon, a nice setup that would have paid at least +2 or more in the afternoon was missed, but I had just exited a trade where I was nearly stopped out, then went +1.50 in my favor, and then I finally scratched per my rules.

So I wasn't in the proper mental frame of mind to do what I should have done when a new setup came up so quickly -- pull 'da trigger!  Darn rust.

I knew within the first hour that this was potentially a dangerous day where you could easily get chopped up to bits.  But you know what, I didn't get chopped up, and I truly believe that behavior is becoming something of the past.  I'm now less likely now to be tempted to enter the murky waters, especially if I sense danger, since I have a greater respect for the markets.  And I'm not as interested in pulling out the machine gun just for the sake of action caused by boredom.

I believe Rogue Grove is finally starting to grow up, and it feels like some sort of milestone has been reached.  This is encouraging, because I'm still just getting started on my grand journey ahead, and every little bit helps a lot.